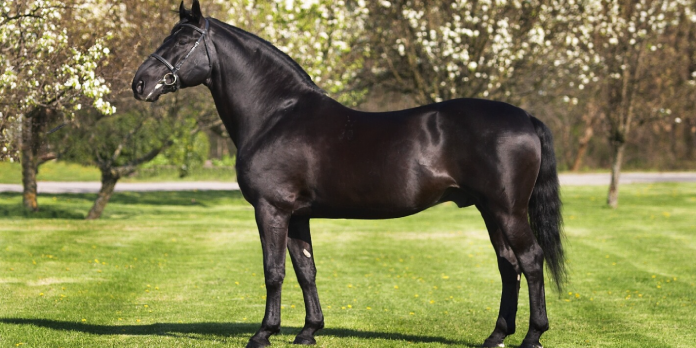 Here we can see, “Nonius Horse”

The Nonius horse was produced in Hungary at the Imperial Stud, Mezohegyes, by rigorous line breeding. It was called after its foundation sire, who was of Anglo-Norman descent. Initially produced for the Hungarian military as a utility and light horse, this breed was primarily employed for agricultural purposes in the twentieth century. They are one of the heaviest warm-blooded horse breeds, yet they are also easiest to care for.

This breed was laid by a stallion named Nonius Senior, born in 1810 on a Calvados stud farm in Normandy, France. In 1816, he was seized from the stud farm of Rosieres-aux-Salines in France and transferred to the Mezohegyes stud alongside nine other stallions. Although his sire is reportedly a thoroughbred named Orion, and his dam was an Anglo-Norman mare, there has been some uncertainty about Nonius Senior’s breeding. Nonius Senior grew to be 16.3 hands tall, with a huge, hefty head, small eyes, long ears, short neck, long back, low-set tail, and a short, steep shoulder blade after reaching maturity. He was rarely employed in the breeding process at the Mezohegyes stud farm because of his lackluster appearance. Nonius gained notoriety once it was discovered that his children were well-built and had a high level of endurance, which was a trait he lacked. After that, he began to be mated with the attractive daughters of Spanish-Neapolitan stallions. The evolution of the Nonius breed began with appropriate line breeding, and it evolved into a big yet attractive horse suited for carting and military driving. His children, consisting of 79 stallions and 122 mares, were allowed to carry on his ancestry after his death in 1838. To address the balance and elegance that the Nonius horses lacked, their female descendants were bred with Thoroughbred and Arabian stallions.

Their popularity suffered a significant setback because of the political and social concerns that arose in the nineteenth century. The Mezohegyes stud kept the majority of these horses, but another stud in Debrecen, Hungary, began cultivating the breed in their way in 1948. Hortobagyi Nonius or Hortobagyi Landrace were heavier than most Mezohegyes Nonius and were known as Hortobagyi Nonius or Hortobagyi Landrace. In 1961, both sub-types were finally merged to make a single breed. Because of the technological advancements that occurred during World War II, these horses lost their military relevance and began to be employed for agricultural purposes. Between 1947 and 1961, the majority of them were murdered for meat since Hungary’s Communist mentality did not embrace the idea of riding horses. There have been attempts to develop sports horses from the Nonius breed, but they have not had much success. They did, however, succeed at combined driving, which was a prominent sport in the 1970s. In 1989, the Nonius Horse Breeders National Association was founded to conserve the purebred Nonius horse.

There are around 450 mares and 80 Nonius stallions today, with the bulk of them being found in the Mezohegyes stud farms, with a substantial number also being discovered in Bulgaria, Romania, and Vojvodina (a Serbian province). They’ve been bred with the Furioso-North Star, another Hungarian horse, and the Shagya Arabian and crossed with Thoroughbreds to generate horses with more excellent jumping abilities.

What is the average lifespan of a Nonius horse?

What is the size of a Nonius horse?

Nonius horses come in a variety of hues.

What is the purpose of Nonius horses?

Today, preservationists breed the breed utilized in agriculture, recreational riding, and competitive driving activities. The largest herds of Nonius horses can still be found in Mezhegyes, with others in various eastern European countries.

Is it true that Nokota horses are extinct?

Is the Nokota horse an uncommon breed?

The Nokota horses are a rare breed of horses that first developed in North Dakota in the nineteenth century. They only survived because they were accidentally imprisoned inside Theodore Roosevelt National Park.

What is the total number of Nokota horses?

The last “traditional” Nokota horses were removed from the wild in 2000, with some being purchased by supporters of the Nokota Horse Conservancy. The National Park Service currently maintains a herd of 70 to 110 horses.

Is it true that Nokota horses are Mustangs?

While the Nokota® herd is of mixed ancestry, a tiny fraction of the horses have conformation akin to the Spanish mustang breed and is consistent with a “Spanish colonial” history. In honor of the first Indian and ranch horses, these horses have been dubbed “traditional” Nokotas.

What is the cost of a Nokota horse?

The Blue Roan Nokota Horse may be purchased for $130.00 or 6 Gold Bars in Red Dead Online at any Stables or from the Handheld Catalogue. 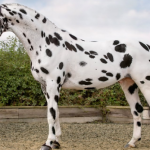 Horse Breeds Margaret - March 9, 2022
0
Here we can see, "Knabstrupper (Knabstrup)" The Knabstrupper is a rare Danish horse breed distinguished by an unusual spectrum of colours on their coats that... 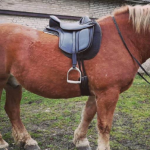 Horse Breeds Margaret - March 2, 2022
0
Here we can see, "Estonian Draft" The Estonian Draft was created primarily for agricultural purposes in Estonia (then part of the USSR or the Soviet... 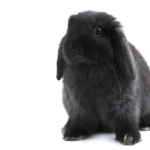